So remember when I said my schedule had calmed down, and I promised to get back on track with the blogging? Well, James kind of messed with my plans and made the last two weeks a complete whirlwind…but I couldn’t be happier about it!

BIG news (in case you missed the insta): We are engaged!! The last two weeks have been such a rush of happiness, overwhelming gratitude, and tons and tons of love. And shock! I’m honestly still pinching myself. While we’ve discussed marriage multiple times and we both knew (as did our families and close friends) that we would likely get engaged in the near-ish future, I honestly didn’t think James would propose until we got back to the United States next spring. I don’t know why, that’s just the timeline I had guessed! So to say he caught me completely off guard is a total understatement!

Here is the is the sweet (you’ll see what I mean) proposal story.

After getting back from Bali three weeks ago, I actually spent the whole week feeling pretty sick. Nothing serious, just gross! (Sorry for the TMI, y’all! Hey, it’s all part of the travel experience.) But even though I was not well, James had been talking all week about going to a nice dinner on Friday night. I wasn’t sure I was up for it, but he was pretty insistent!

Friday evening we headed to PS Cafe Ann Siang Hill, a really lovely restaurant that we’ve been wanting to try. It’s located on our favorite street, walking distance from our condo, and is well-known for incredible food plus a gorgeous city view on the rooftop. I was so excited when we got seated at the nicest, coziest table in the restaurant with that perfect view. No coincidence, I later learned!

We enjoyed a great dinner and then they brought the dessert menus. After barely looking at the menu, I told James I didn’t want anything. Remember, I hadn’t been feeling well all week! So I said no to dessert…for probably the first time in my life.

James said “Well why don’t you just take a look at the menu, see if anything looks good?”

I picked it up, did a quick glance, said no again.

James, who later told me he thought he had just been rejected, then said, in a completely bizarre voice, “Why don’t you just look at the menu, there on the bottom right maybe?!?!”

I still had no idea what was happening, but when I looked again, there, right under the “Apple Gallette”, printed in the dessert menu, was the question: 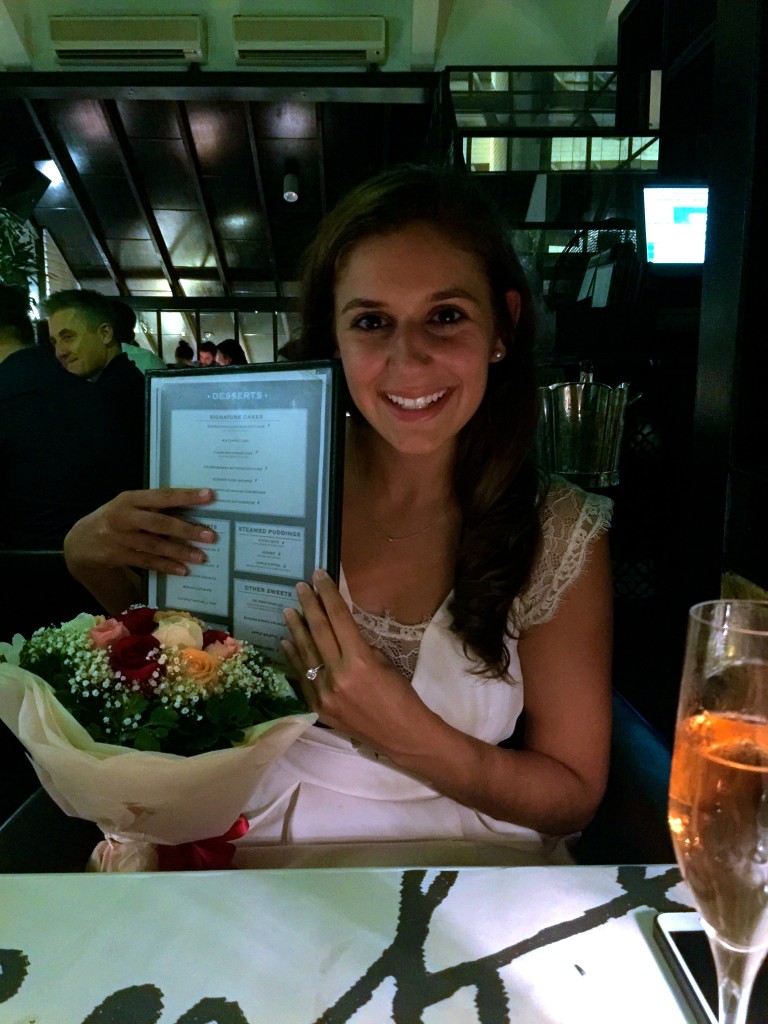 Cue me practically going into shock.  The next thing I knew James was down on one knee, I practically shouted “Yes!”, and then I had a gorgeous ring on my finger and the whole restaurant was cheering and applauding for us!

The rest of the night was perfect. We hung out on PS Cafe’s gorgeous roof, drank champagne, ate chocolate cake, and just couldn’t stop beaming at each other! I was – and am! – completely ecstatic to be James’ fiancée! It was so much fun hearing his stories about planning the proposal, from getting the ring over here, to planning the menu, to getting the staff at PS Cafe in on the surprise. It turns out James was at the restaurant five times that week! He became friends with the manager, the waitstaff, the bartender…the bartender was giving him free drinks on Friday afternoon when he was there just hours before the proposal because he said James, “looked so nervous”. (Awwwww!)

The last two weeks have been filled with tons of Skype calls, Whatsapp messages, and Facetimes with everyone we love. We have received so much support and generosity from back home during this happy time! We miss you all and are so grateful to have such amazing people in our lives.

We’ve also spent the last two weeks celebrating here, just the two of us! It’s been incredible. I am so excited about the rest of our time here in Asia together as an engaged couple, and beyond that, for everything the future holds!