Bold claim? Clearly. Have I done the research to back this up? Not at all (though that would be a dream come true). But based on our experience at Thip Samai plus the experiences of all the great travel bloggers who went before us, and eventually led us there, I feel confident that Thip Samai is at the top of the list!

Before I get into the greatness that is Thip Samai, let’s talk pad thai for a second. I adore all noodle dishes, particularly Asian noodle dishes, and pad thai is no exception. I actually slightly prefer pad see ew, another Thai stir fried noodle dish, but pad thai is a close second.

But for some reason, I get the feeling there’s bit of a stigma around being an American traveler in Thailand and ordering pad thai. Maybe it’s because pad thai is likely the one dish every American, no matter how little experience they have with Thai food, has likely encountered on a menu back home. Maybe because pad thai’s origins are not even authentically Thai. Whatever the reason, ordering pad thai when we were at restaurants or street food carts around Thailand felt like a cop-out to me. It made me feel uncultured; like I was representing westerners as a people who could only try the most Americanized Thai dish. It felt lame.

I don’t really know why I’m sharing this rambling opinion, other than just to say: to any other western traveler out there who has ever felt lame ordering pad thai in Thailand, you are not alone. But don’t worry – you can just go to Thip Samai, where everybody’s doing it!

Thip Samai is pretty easy to find at this point because it’s become a bit of a media darling. I will admit it right now – I am in no way currently sharing some super secret, hidden, best pad thai spot with you all. Sorry! The good news is you’ll be able to get there and get plenty of info on the place with a simple google search. It’s located just across the street from Wat Saket (Temple of the Golden Mount), so very easy to find.

The pad thai starts being prepped around 5pm. We arrived at 6 on the dot and were seated right away, but we got lucky – by the time we got our food, there was a line snaking down the block.

As you approach you’ll notice the food prep stations seem to have spilled out from the restaurant; the entire sidewalk around the restaurant is taken up by chefs working on their part of the noodle dishes. Some chefs are chopping chillies, portioning out noodles, or slicing limes in an open air “kitchen” area that is almost fully inside the restaurant. But completely outside, literally in the walkway, there are chefs stir frying the noodles in large woks over dancing open flames.

One or two chefs are working on the part that makes Thip Samai pad thai so special – the egg wrap. It’s an incredible process to watch. The chef ladles a very thin layer of egg into a wok, then throws what looks like a completed, ready-to-serve plate of pad thai right in the center. Two quick flicks of the wrist, and the pad thai is all wrapped up in a thin omelette, almost like an egg-shell in a way.

That’s exactly what we ordered, Thip Samai’s specialty – the pad thai in egg. It’s about 90 baht a plate – much pricier than typical Thai street food, but oh so worth it. Carefully breaking through the egg wrap reveals a sizable portion of steaming, orangey noodles surrounding plump pink prawns, green leek pieces and some bean sprouts for crunch. 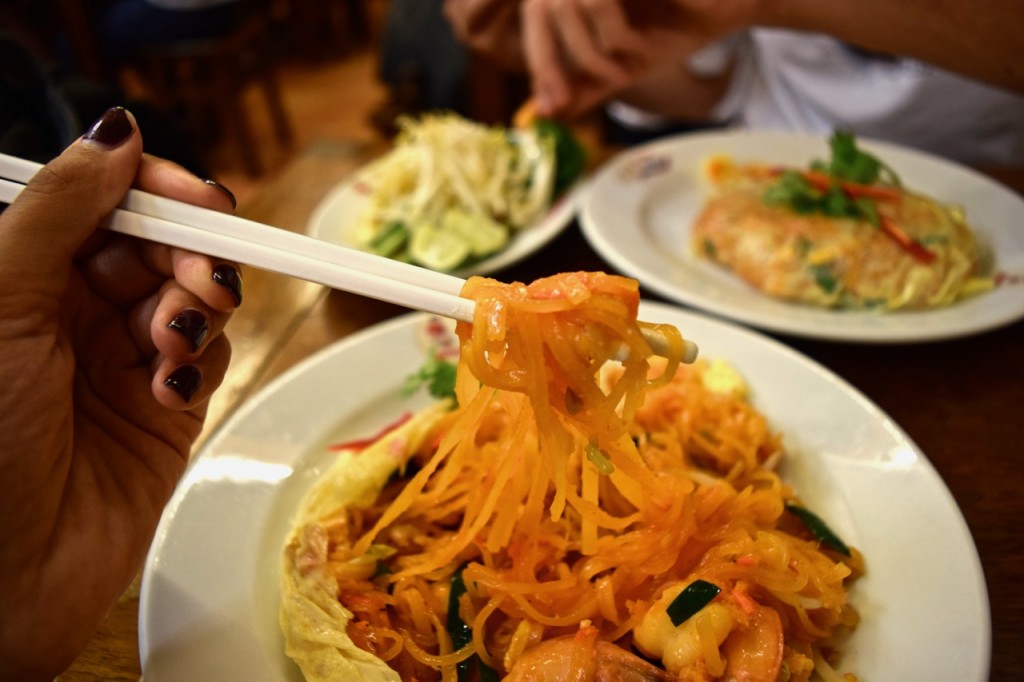 The flavors and textures in the dish are phenomenal. The noodles are soft, but not at all gummy, contrasting nicely with the tougher prawns. Each mouthful combines the heat of the chillies with the zest of lime juice and an overall slightly nutty sweetness. That final flavor is the one I associate with pad thai the most, and Thip Samai nailed it. 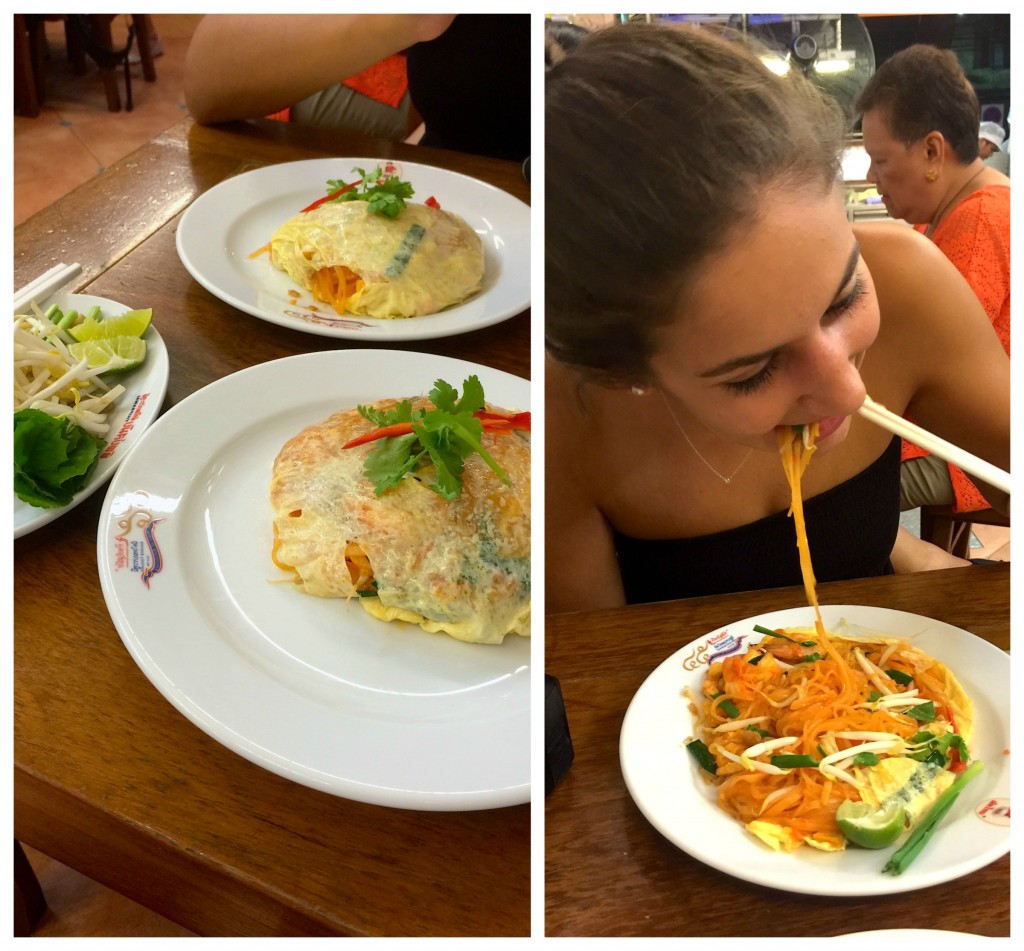 To say this was a huge hit with us would be an understatement. Hands down, we both agreed, best pad thai we’ve ever had. After devouring our first plates in record time, we seriously considered ordering a third to share, but decided that would be too gluttonous. In the time since we left Bangkok, we have both brought up multiple times how we regret that decision not to order one more!

We even tried to fit into our schedule a way to go back to Thip Samai again two nights later or for lunch the day of our flight home but it just wasn’t in the cards. But the next time we inevitably find ourselves in the Big Mango, we will definitely be back for the best pad thai in Bangkok. And we’ll order three.

“in search of NOODLES” is a regular feature here at love and noodles where we highlight some of the best noodle dish we’ve tried so far and where to find them. All noodles of various size, shape, cuisine, and flavor are in the running – we don’t discriminate. For previous “in search of NOODLES” posts, check here.

One thought on “in search of NOODLES: Thip Samai, Bangkok”